VIDA isn’t the only application that can make use of these adapters. A Czech company called D5T5 offer a separate app called ‘VDASH’. In addition to some basic diagnostic abilities VDASH can also (for a fee) perform various coding tasks (enabling features etc.) along with selling flash remaps that can be applied at home.
DiCE is preffered and fully supported for programming. All other J2534 devices are supported for diagnostics and sometimes experimental programming.
VDASH is primarily for personal Volvo vehicles and specifically for their diagnostics along with installing softwares using an OBD II socket. VDASH is fully compatible with the DiCE Volvo cable and some original or really good J2534-based interfaces, for example: vxdiag.
Note:
Mongoose is not supported.
For other VXDIAG series (VCX SE and VCX DoIP you need to test by your side.)
D5T5 brings the support of generic J2534 devices into VDASH. There’re plenty of various devices on the market, we started with affordable VXDIAG. The basic diagnostics seem to work, the DIM languages have been tested too. The overall functionality is briefly the same, but may slower than with DiCE, for example, P3 CEM pin decoding is 3-5x slower, also DIM loading is slower than usually, including all the reading functions. The best performance seems to be with the P3 cars (using industry standard ISO protocol, except the decoding functionality listed).

upgrade the firmware to the latest version using the downloads here:
http://www.vxdiag.net/managecenter/download/vxdiag.zip

We don’t provide VDASH software.  VDASH is publicly available on the d5t5 website.
Here is the instruction on how to decode CEM PIN with VXDIAG and VDASH.

To be able to apply a config change you first need to decode the PIN used by the cars ‘Central Electronic Module’ (CEM). On 2010 Volvo XC70 D5 AWD this can be done by the VDASH application. It’s a one time task, I think the application essentially brute-forces it’s way to the PIN by trying every single combination until it finds a match.

One of the tasks that VDASH can perform is to program additional keys to the car. My car only came with a single key. I don’t really like owning a car with a single key – mostly because I suspect my toddler will lock himself inside with the key at some point, or hide it somewhere around the house. VDASH charge a very reasonable €22 to code a key, and blank keys can be picked up for about £25 on eBay.

So, the process should be simply a case of decoding the CEM PIN, then paying some money and running through the steps to code an additional key. Typically, a DiCE clone adapter seems to be able to decode the PIN in about 8hrs. VXDIAG takes more than this.

To perform the CEM decode the car needs to be left with the key in, along with a laptop, and a battery charger connected to prevent it from draining. So the first challenge was squeezing the car into my garage far enough to close the door and give me somewhere secure to leave it.

D5T5 state that you need at least a 12A charger to sustain the car. 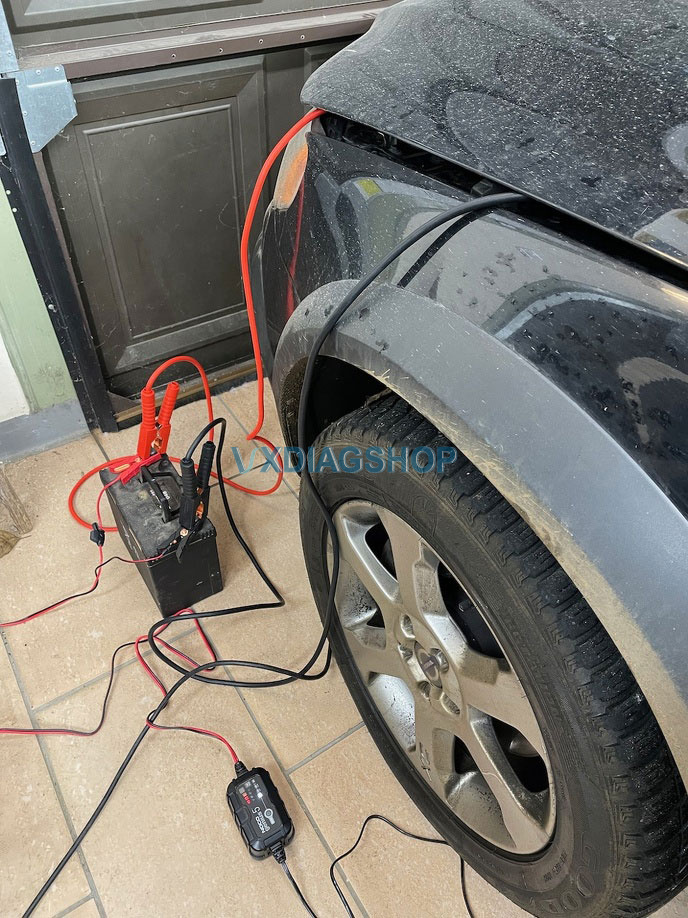 After leaving the car connected for 48 hours it was still showing 11 days remaining. Thankfully, you can stop this process and pick up where you left off. I needed to use the car this weekend so I’ve stopped it at a rather depressing 14% completion. The internet seems to suggest that the ETA is inaccurate and it’ll probably finish a lot sooner. I imagine that’s because it only needs to run until it finds a match and 100% is probably the point that every possible combination has been tried, so unless I’m unlucky and no match is found until the final combination is used it should hopefully finish before then.

I’d run into a second issue the last time I attempted to crack the PIN. After about 48hrs of trying to charge a battery with a constant drain from the car my smart charger decided that the battery must be faulty and stopped charging, leaving the car to flatten itself. Thankfully, I caught it whilst it was still showing a little over 11v, and it charged back to a healthy state just fine once the adapter was removed.

I’ve connected a spare battery between the car and the charger this time to effectively give the car a larger battery. If nothing else it might buy me some extra time to notice that my charger has turned off and restart it. Far from an ideal solution, but I’m keen to use what I’ve already got to get through a process that I should only have to carry out once. 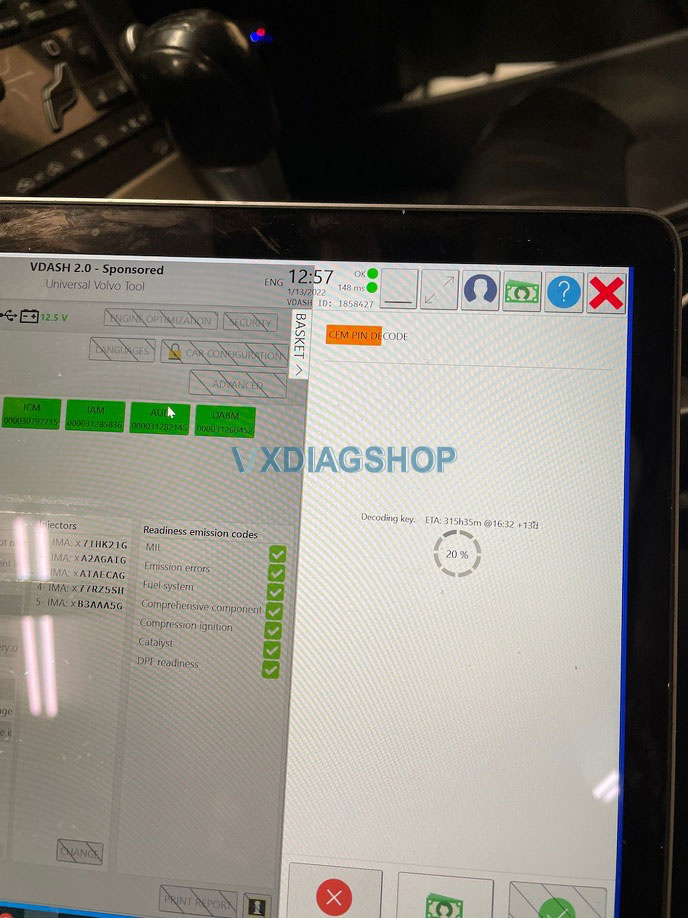 Got the adapter connected to an old Macbook running Windows 10 and VDASH. The software picked up from where the adapter had left off. I installed a VNC/Remote Desktop server on the laptop so that I could keep an eye on progress from the warmth of the house.
So VXDIAG VCX NANO with VDASH is slow but it got the job done over a weekend. You need to decode the CEM unit and keep the car charged or it will stop. Once the pin is obtained Vdash stores the pin to your account so it isn’t needed if you have to change computers. From there you pay for your changes and program the car.